The Election Aftermath for Investors

Wednesday marked a month since Donald Trump was elected 45th President of the United States, and if the stock market's performance since then is any indication, much of the concern over a Trump Presidency was overblown. Plenty of policy details remain to be ironed out, many within Trump's first 100 days, but the Dow is up 1,200 points since Election Day and is inching closer to the uncharted territory of 20,000. There is an old Wall Street adage that says "markets climb a wall of worry" which in today's case basically means that the momentum the stock market had prior to the election seems to be continuing, and enhanced by, Trump's investor and business friendly policy positions. Trump's apparent less friendly economic policies (i.e. a 35% tariff on imports) likely won't pass muster with Congress, so Wall Street is taking those with a grain of a salt.

What does all of this mean for investors? For one, the market's performance in the aftermath of the election suggests that to Wall Street, the removal of uncertainty in the marketplace is far more important than almost any other development in the past few weeks. Many investors certainly take comfort in the fact that they can assess the potential impacts of a Trump Presidency on the economy and their own investments and not simply speculate further about what a Trump Presidency means.

My guidance to an individual investor is to avoid any form of market timing; do not attempt to jump into out of investments in order to "ride momentum" or attempt to capture price movement in stocks that some speculate many benefit from a Trump Presidency. If you have any capital losses that you can use to offset gains you may have realized while rebalancing your portfolio as the year winds down, it may be wise to consider doing so. Lastly, consider maxing out your 2016 Roth IRA contributions. The 2016 Roth IRA contribution limit (subject to certain income limitations), is $5,500 or $6,500 if you are 50 or older. 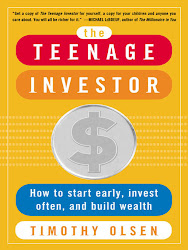 Tim Olsen
Louisiana, United States
My name is Tim Olsen, I am 30 years old and have been in the workforce for four years after graduating with a bachelor's degree in Finance from LSU. I also have an MBA from Loyola University New Orleans, and am the author of The Teenage Investor: How to Start Early, Invest Often and Build Wealth which was published when I was 13. Now, as a Gen Y investor advocate, my goal is to turn Generation Y investors into Generation WI$E investors.